GETTING TO KNOW THE BUSTLE HUBSPOT STARTER PACK

TransForm Version 5.3.5 has a collection of new capabilities, UI improvements, bug fixes, and more. This document highlights some of them.


This version introduces major new capabilities, including queuing, “canned” (predefined) image annotation, and the ability to set the mobile device to use different TransForm servers.

One common use for TransForm is the dispatch scenario in which an administrator creates a form in TransForm Central and assigns it to an individual user, who then opens the form on their mobile device.

With queuing, the administrator now has the option to distribute the same form to a group of people instead of assigning it to an individual. Users can then log in with their mobile device and claim the form - assigning the form to themselves and taking it out of the queue.

Alpha TransForm now allows you to include “canned” images with your image fields. Instead of taking a picture using the device’s camera, or choosing a picture from the camera roll, you can instead select from one or more predefined images that you have saved to the device’s on-board storage.
A common use for this feature is to allow users to mark up diagrams. For example, if a form is being used to admit patients for physical therapy, you could have a diagram of a human body, and annotate parts of the body where the patient reports pain. Or, you could mark up the visible damage to a car after an accident, as shown in the next picture.

Setting the TransForm Server Location in the Mobile App

Users reported difficulty in tapping the buttons at the top of the TransForm mobile application. In this version, the buttons have been enlarged, making them much easier to use.

As the photo field becomes more sophisticated with the introduction of canned images, you can now customize the instructional message that appears on photo fields in your form. For example, if you were using a photo field to allow someone to mark up a diagram of car to show damage, the default caption “Tap to Capture Image” wouldn’t make much sense to the user. Instead, you can add a custom message, like “Sketch Damage to Vehicle.” 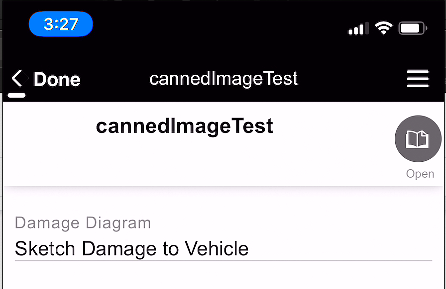 In some cases, you might not want to allow users to create new tickets themselves in the mobile application. You may instead for them to fill in only tickets that were created for them by an administrator. In this case, you can remove the Add Form button based on the user’s role.

Many new capabilities have been added to the TransForm Programming Language (TPL) and the development environment. These include:
New GPS Functions – TPL now has four new GPS related functions: GPSStart(), GPSStop(), and GPSPosition(), and latLongDistance(). With these new functions, you can capture the user’s current coordinates and compute the distance between coordinates.
Read Only Expressions – Fields can now be switched between read-only and read-writeable based on a TPL expression. For example, if you created a form that served as an invoice, you could use a read only expression to prevent users from changing the price of items unless they had sufficient permission.
Edit IF Commands in the Code Editor – IF Commands, used for conditionally showing or hiding parts of form, can now be edited in the code editor. This makes it easier to build sophisticated expressions using multiple fields and functions.
New test() Function – Similar to the IF() function in Excel, test() returns one of two values depending on whether an expression is true or false.
New HTML Tags – For reasons of security, TPL only allows certain tags to be used in HTML blocks. In this version, additional HTML tags may now be used. These additional tags are:
<th>, <caption>, <thead>, <tfoot>, <tbody>, <colgroup>, and <col>.
Improvement downloadOnDeviceData() – This function now checks for login expiration.

• Fixed args(n>1) bug where order was backwards. When creating functions, the arguments that were passed in were returned in the reverse order. This is now fixed.
• Fixed a bug that prevented back-to-back SQLite queries in the same script.
• Fixed issues with centered containers for date/date-time spinners displaying poorly on some devices.
• Upgraded SQLite plugin to one with better support, performance.