Announcing Alpha TransForm Web Filler. We've taken our mobile TransForm App and adapted a web filler for creating, filling out, and submitting forms. The web filler lets users who don't have a mobile device fill out forms, allowing you to expand your use of TransForm throughout your organization. 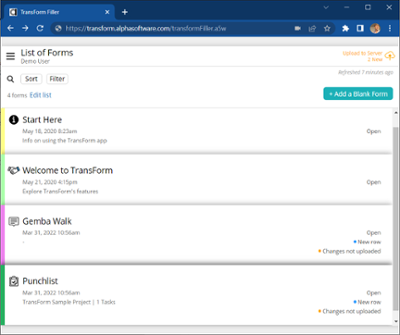 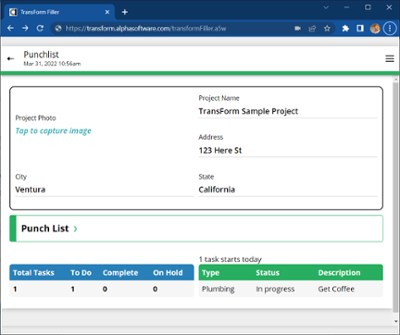 In addition to rolling out a new web app, we've also upgraded the Alpha TransForm mobile form filler application framework as part of our commitment to keeping Alpha TransForm up-to-date and in compliance with the App Store and Google Play requirements. We're confident you won't notice this change.

Some features are unavailable or may not behave as expected in this initial version of the Web Filler. This includes:

Future versions will include features currently not available in the initial release of the web filler.

New system variables and TPL functions have been added. They can be used to determine what filler, the mobile or web filler, the user is using to fill in a form. If your forms use TPL code to access on-device data, you'll want to take advantage of them to adapt your forms for use in the web filler:

Other New Features and Changes

This release is not without other notable improvements. We're constantly iterating to ensure our product is reliable. We've made additional improvements throughout TransForm Central and the filler application. This includes the addition of a new TransForm API endpoint, ExecuteOnSubmitEvents. We've also modified Location fields to only display the Map of the location if the device can connect to Alpha TransForm's Servers and the login is not expired.

And last but not least, we took care of some issues a few folks encountered. Of course, our goal is always to prevent these problems from ever making it into our products, but at the end of the day, we're still human.