Configuring AlphaDAO Connections When Publishing to a Remote Server


A project that uses any type of SQL based database will normally use AlphaDAO connection strings. The suggested method is to use named connections. This allows using the name of the connection in every area that requires a connection. The name will then resolve to an actual connection string.

Named connections are initially defined in the development work space and typically point to a local test database. The builder is opened either from the control panel menu, or from any layout that uses an AlphaDAO connection. 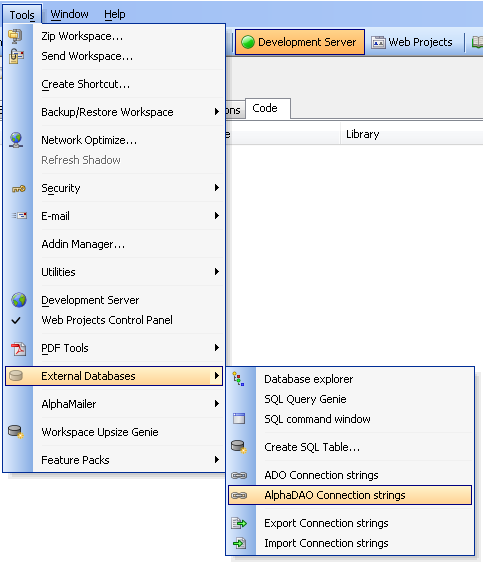 A named connection can be edited or a new one created using the dialog builder. 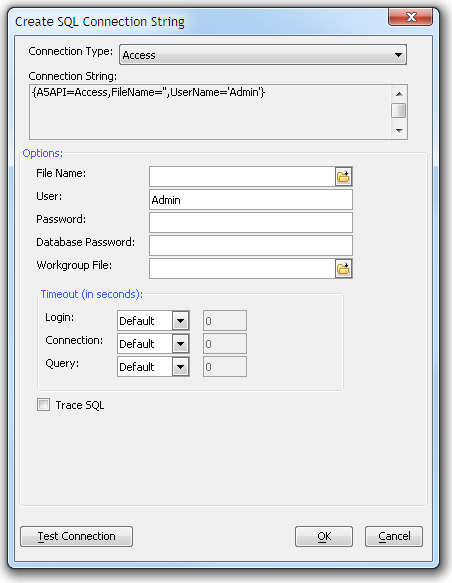 The “Test Connection” button will verify if the connection is valid for the local development workspace.


Deploying to a Remote Server

One of the challenges of publishing an application with connections strings is creating a connection that is appropriate from the server. Since the data server for testing is often a different server than the one used for production or has a different host address, the process requires some planning and information.

This opens a list of named connections defined in the workspace. 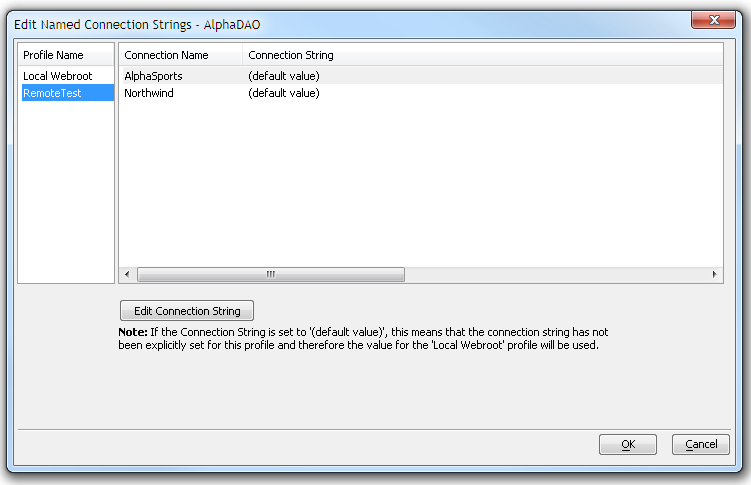 This genie has three options.

“Set to default value” will appear as above and the remote server will attempt to use the same connection as the local development system.  Unless the data server is on the same network as the development system, this would not work in the published environment.

“Copy default value” will place the original connection string in the window where it can be edited manually. This is useful if the change is minor, such as a different file path, or a different server name.

Enter the data supplied by the database owner that will allow access from the remove application server.  Since this server is probably not accessible in the local environment, the data must be typed into each section rather that making a selection from a dropdown control. 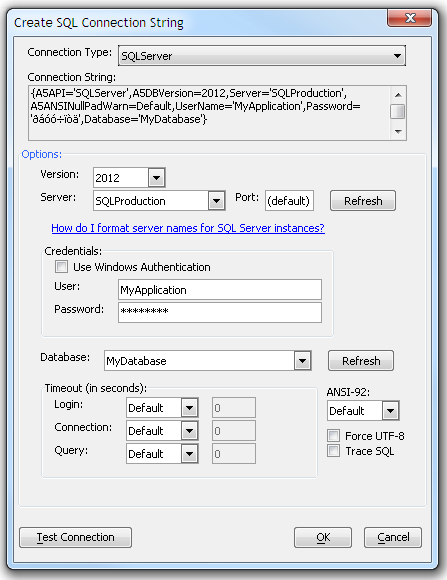 The “Test Connection” button will also normally not succeed if the actual database is not accessible. 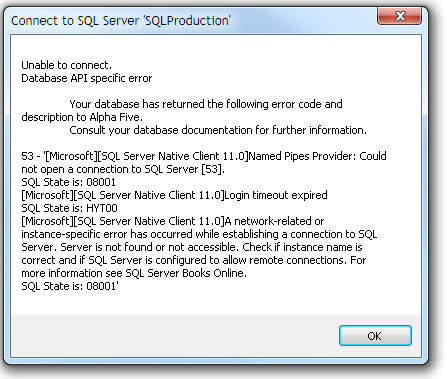 Select OK, and the connections string genie will now show the actual connection string to use for this named connection when the project is published to the remote server.

Click OK again, and named connections genie will also show the new string.  This will be the actual connections string used when the project is published with this publish profile.

Where is the Data Stored?

When any project is published a file named “A5_application.a5i” is part of the published data. This file contains information about the application and is regenerated and overwritten on every publish.

NOTE: This file should normally not be edited. Any changes may break the application and edits will be overwritten if anything is published to the folder.

The file can be opened in a text editor and examined. The actual connection strings to be used are in a section similar to below.

Each named connection, such as “AlphaSports” has a connection string that was defined in the publish profile. The connection is encrypted for security.

While editing this file is not recommended, it is possible to change the connection strings in the file. The encrypted section can be replaced with a clear text string. The following entries are equivalent.


Defining a Connection String Directly on the Deployed Server

There is a method to define a connection string directly on the deployed server. This is an advanced technique, but will also verify if any connection is valid.

Depending on how the application is started, there may be a server icon on the Windows system tray.

If the icon is not found, a second instance of the application server can be opened. This instance will likely start with an error that a port is in use, but the server doesn’t actually have to be running for this operation. The default Windows start menu may look like the following:

After the instance is loaded, right click on the icon to open the application server menu.

Select the “Interactive Window” to open a special window that will allow running code directly on the server.

In the interactive window, type in the code exactly as shown below and hit ENTER.

This will open the same SQL Connections String builder as used to create the original named connections.

A connection can be defined in this builder and any data server that can be reached from this application server can be selected.

If a connection string had previously been defined as part of a publish profile, the string can be pasted into the Connection String window. 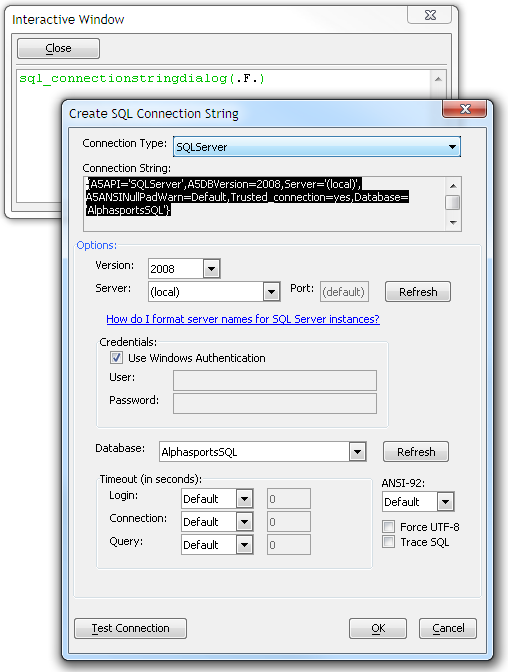 Since the builder is running in the same environment as the actual application server, any connections defined should work and connect.

Pressing the “Test Connection” should be successful if the string is valid. 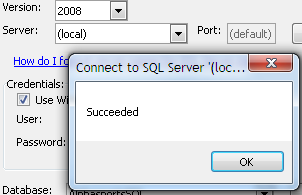 This new connection string could be added to the “a5_application.a5i” file in the published webroot folder as described in this document. However, since this file is overwritten on every publish, this is not recommended. The correct method is to place the valid connections string in the publish profile definition.
Developer Deep Dives, Alpha Anywhere
Internet Failure: Why You Need to Build Offline Capabilities Into Apps
Executing Shell Commands Directly from the Interactive Window 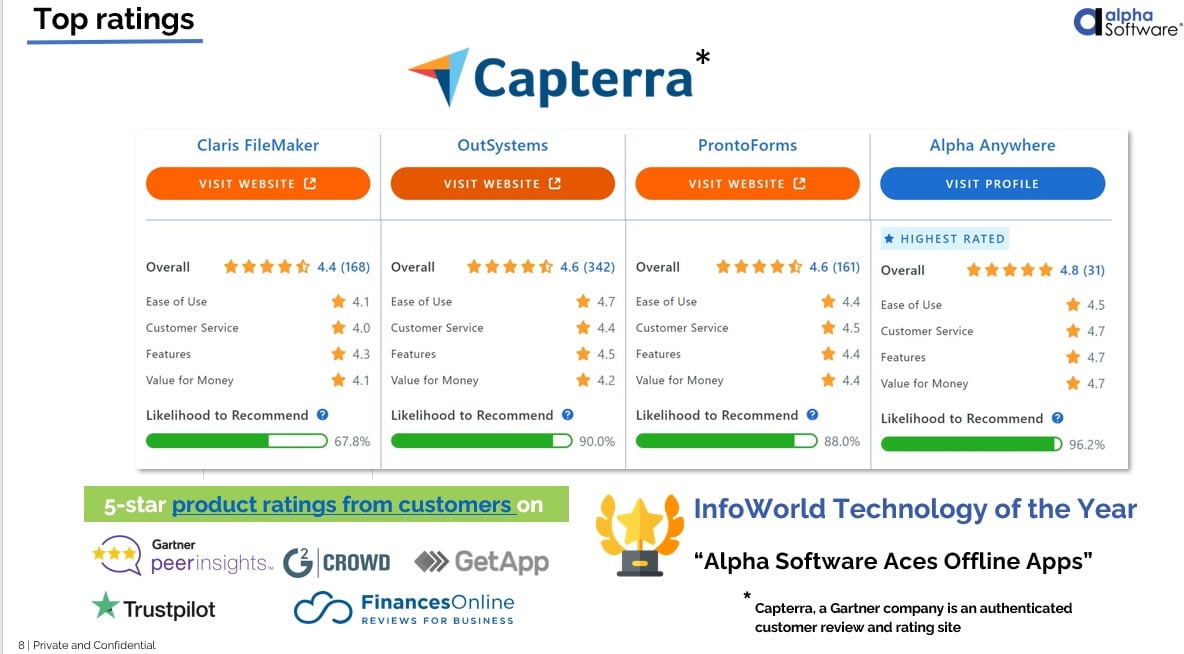 Top Rated Low-code Software - Alpha Software
The Alpha platform is the only unified mobile and web app development and deployment environment with distinct “no-code” and “low-code” components. Using the Alpha TransForm no-code product, business users and developers can take full advantage of all the capabilities of the smartphone to turn any form into a mobile app in minutes, and power users can add advanced app functionality with Alpha TransForm's built-in programming language. IT developers can use the Alpha Anywhere low-code environment to develop complex web or mobile business apps from scratch, integrate data with existing systems of record and workflows (including data collected via Alpha TransForm), and add additional security or authentication requirements to protect corporate data.