IoT App Development Is on the Rise

The rising use of sensors has created more demand for IoT solutions and IoT application development.

The article argues that the sheer volume and ubiquity of Internet of Things (IoT) devices will lead to an explosion of mobile app development. There’s no doubt that IoT devices will soon be everywhere.

A Gartner report says that by the end of this year, some 8.4 billion IoT devices will be in use, up 31% over 2016. Consumers will use most of them, according to the firm. The consumer segment, Gartner says, will account for 63% of all devices. But businesses will spend more money on them, $964 billion in 2017, versus $725 billion by consumers. As for the future: hardware spending by consumers and businesses on IoT technologies in 2020 will total nearly $3 trillion. All of this investment in IoT will drive mobile app development.

Eastwood says all these new devices, including smart homes, are spurring new apps and businesses. He writes: “Innovators of all stripes have tapped into the Internet of Things (IoT) as they develop the best products and services of the 21st century, but few have made as much use of the IoT as today’s mobile app developers have. By exploiting the ubiquity of today’s IoT, software developers are finding hordes of new customers by the day, and show little signs of slowing down their industry’s growth.”

He points out that among the most popular IoT devices are smartphones. Smartphones don’t just allow people to access the internet and apps, but also provide a vast amount of high-speed data that can be tapped into and used by businesses. And the premier company at tapping into that data, he notes, is Uber. He explains, “By exploiting the fact that virtually every one of its customers has a smartphone in their pocket, Uber is capable of tracking potential customers and its vast fleet simultaneously."

He continues, "As a company, Uber couldn’t succeed without the myriad of data streams constantly pouring information into it from the IoT.” In fact, without that IoT data, he notes, Uber “could never have gotten off the ground.” 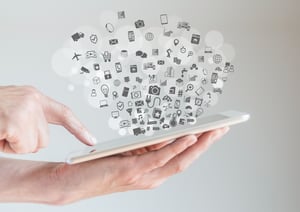 Eastwood expects that many other businesses will spring up to exploit IoT devices. For example, the Internet of Things will drive mobile app development in the construction industry.

IoT combined with artificial intelligence can revolutionize construction, as I’ve written about in my blog, “Artificial Intelligence, IoT and Mobile Apps for Construction.” Sensors will capture every aspect of the construction process, from design to delivery, and mobile apps will be written to take advantage of all that data to cut costs, design better buildings and improve the way buildings are constructed.

You don’t need to wait for IoT and AI to hit the construction industry to get big benefits out of mobile, though. You can use Alpha Anywhere to build offline field service apps, inspection apps, and much more.

We recently showed how to build IoT apps using our Alpha TransForm no-code app builder. The software includes its own programming language, which allows developers to leverage sensor data. The webinar discusses the benefits of using sensors to collect more business data at a lower cost, and how to develop apps that can help collect and share more data. You can try the app builder for free and view the IoT apps webinar here.

Each year, the Alpha DevCon user conference brings together developers from all over the world to discuss new trends, app development challenges, and the rise of new technologies. We discuss how AI, ML, and IoT, cloud computing will drive mobile app development, including case studies from developers building IoT software.

The Future of App Development: Robotics, Sensors and AI

In a previous DevCon presentation, Tom Ryden of MassRobotics revealed some of the biggest innovations coming in the area of IoT and autonomous machines in the next 10 years. He explained how many robotics companies and manufacturers will utilize mobile apps to power smart machines, and how mobile apps will be expected to use the data coming from sensors in these machines. The presentation covered how artificial intelligence (AI) advancements will reshape the way we interact with robots and IoT devices, and the demands these trends will place on mobile apps.

Read more about AI and IoT.