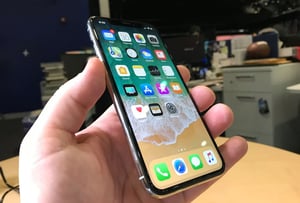 New iPhones show that artificial intelligence is the future of mobile apps.

When millions of people bring home their new generation of iPhones, they’ll be packing something far more powerful than they imagine: a processor built specifically for artificial intelligence (AI) that gives them AI capabilities right out of the box. It’s the most powerful piece of evidence yet that AI is the future of mobile apps.

The iPhone 8, 8 Plus and iPhone X are all powered by Apple’s six-core SoC A11 bionic processor, which has been optimized for AI.  Inside it is hardware that Apple calls a “neural engine” that can perform up to 600 billion A.I.-specific operations per second. It’s designed to work with Apple's Core ML (machine learning) developer tools, which give app developers easy access to machine learning on a mobile device. This means that people who develop for the iPhone can easily plug AI into the apps they’re developing, without requiring a high level of expertise.

The new iPhones take advantage of AI without you knowing it. Face ID for fast login uses AI, as does the Portrait Lighting feature to brighten faces in photos you take, and Animoji, animated avatars that change facial expressions when you do.

This chip isn’t expected to be ready for several years, and it is expected to be a quantum leap over the existing AI capabilities built into Samsung chips. Past Samsung AI chips relied on the cloud for some things, such as retrieving data. These new chips would do away with that, dramatically speeding up AI tasks. Android Authority reports that the Korea Herald says, “In the next three years or so, smartphones will have designated chips that will improve the processing of AI features by 50 percent from today.”

The AI-optimized chips from Apple and Samsung will ensure that AI will be built into all kinds of mobile apps. Gartner says that intelligent apps are one of the top ten strategic trends for 2017. AI will be used for more than just as to help with commonplace tasks like prioritizing email. Gartner says they’ll be built into marketing and ERP apps, as well as every category of enterprise mobile apps. The firm says that most of the 200 largest companies in the world to have developed intelligent apps by 2018.

Read more about why artificial intelligence will be the next big thing in mobile, why it will be increasingly built into mobile apps, and how it will be fueled by cheaper sensors.

And read through some examples of how the oil and gas industry will benefit from the combination of artificial intelligence and mobile development.