Spice up your apps with Animation

Spreadsheets with a lot of columns become challenging to read when critical information scrolls off-screen. One way spreadsheet designers deal with this is to freeze columns and headings. Freezing columns keeps key details visible, such as a name or place, making it easier to understand the rest of the spreadsheet's information.

The List's column view is very similar to a spreadsheet view. Like spreadsheets, Lists with too many columns become hard to follow. Alpha Anywhere 4.6.2.6 adds the ability to freeze List columns in place with the new Fixed and Virtual Columns feature. Frozen columns remain on-screen while scrolling the List.

Alpha Anywhere is phasing in a new PDF report generation engine. We first introduced this new method in Alpha Anywhere 4.6.2.2. Called "Direct to PDF," this new PDF generation method allows us to bypass the Amyuni Printer.

Report generation using the Amyuni Printer is now deprecated, and we are removing the Amyuni printer drivers in a future release of Alpha Anywhere.

Simplifying Upgrades with the Universal Installer

Installing Alpha Anywhere is now easier than ever with the release of our new Universal Installer. Manage all your product installations with one app, including the Developer Edition, Application Server for IIS, Application Server, and desktop Runtime. You can easily upgrade or rollback Stable, Preview, and Nightly releases of any Alpha Anywhere product with the Universal Installer.

The new installer is a departure from the traditional model where you had to download an installer for each version of every product you wanted to install or upgrade. The Universal Installer only needs to be downloaded once. Updates are available as they're released and applied with a click of a button in the Universal Installer. 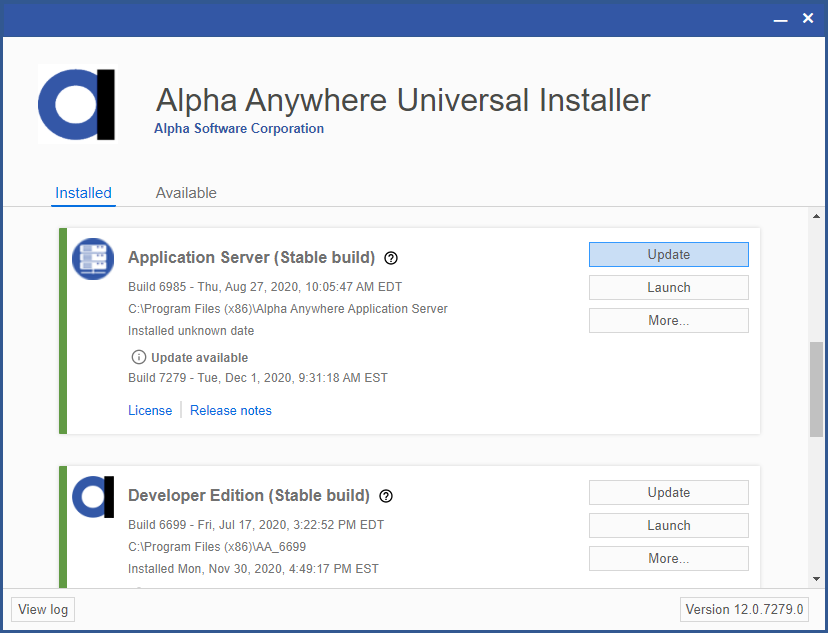 We've put together several how-to articles to help you out with your first experience with Universal Installer:

Build apps for free with the Alpha Anywhere Community Edition

Want to try the new release but don't have Alpha Anywhere? Download the Alpha Anywhere Community Edition today! Gain access to all of the new features in Alpha Anywhere 4.6.2.6 as well as the full development platform for building web and mobile applications. Your apps can include GPS, audio and video recording, photos, digital signatures, push notifications and more. You'll be able to connect your apps to popular databases and web services you already use.

Build all the apps you need without any costs with a free license of Alpha Anywhere Community Edition.