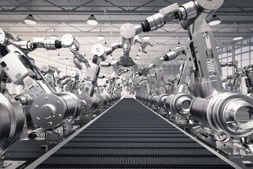 Using robotic process automation can be a great time-saver and money-saver for many businesses. But there’s a serious hidden cost that could not just wipe out all those savings, but have you losing money as well. It’s that the robot systems may not have been properly licensed to work with software from your vendors, and you could be on the hook for a lot more money that you realize. Here's what you should know about robotic automation and software licensing contracts.

So warns Louis Wihl in his article, “The high price of not understanding how automation works with existing software licenses,” published in ComputerWeekly. The core of his argument is this: “Integrating robotics software into a software estate is very different from the usual methods of software implementation. For a start, the robots are usually interacting with existing software via a user interface as a human would, not via an application programming interface (API). This has big operational advantages, but also has the potential to result in very substantial, unexpected licensing and legal costs.”

That means before using any robotic processes, you should first check whether your licenses allow them. Wihl warns: “Many will not.”

As a cautionary tale, he points to an ongoing legal dispute between the alcoholic beverage producer Diageo and SAP. It’s a fairly complex suit, so I won’t go into all the details here, but SAP claimed that Diageo didn’t have the licenses from it required to tie SAP’s software to Salesforce’s software. The UK High Court ruled in SAP’s favor, which means that Diageo will be responsible for licensing fees well beyond those in his contract. The precise number hasn’t yet been decided on. SAP, however, is asking for £54,503,578.

Wihl notes that although the case didn’t specifically consider the implementation of robotic software, the ruling, “shows that the SAP software license was ambiguous in how to deal with new uses of the software.” And he warns, “The interpretation of software licenses in the context of robotics software will usually be even more complicated than in the case of the SAP license. Robotic ‘users’ were not anticipated until relatively recently, and very few software licenses will expressly allow their use with the subject software.”

Because of that, here’s his recommendation for any company that plans to use robotic automation with their existing software vendor: “Before implementing robotics software, businesses must check their current license terms to ensure they are legally able to do so. And if there is any serious doubt about that, they must agree suitable changes to those terms. As the Diageo case shows, the benefits of introducing robotics software can be wiped out many times over if you get this wrong.”

At Alpha Software, we know how complex licensing models can be. And so we’ve put together a white paper to help you understand it all. Get a free copy of “RAD (rapid application development) Platform Licensing Models and How They Affect TCO.” It’s part of a longer buyers guide covering RAD platforms.