App Development Software for iPhone completes the Job in 12 hours 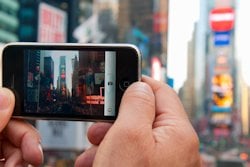 iPhone app development in an increasingly mobile world does NOT have to be tedious, expensive and time consuming. New app development software for building iPhone and iPad apps is making the job fast and easy.

In a world where time-to-market is king, extra time is one thing that software developers are perpetually lacking. There is increasing demand for most business applications to run on multiple devices — whether on the desktop web, tablets or smartphones.

Last week, South Australia based software developer Michael Darby sent us a video demo of a Point-of-Sale mobile app he developed for iPhones using Alpha Anywhere. The iOS app is complete with charting, mapping, reporting, and order processing for sales, Michael's iPhone app is a full-featured field ready application that runs on smartphones, tablets and the desktop. What's the kicker? He built it in "just 12 hours!"

With Alpha Anywhere, you can develop rich, stunning iOS apps for any size iPhone or iPad with native-like functionality, including touch events. In addition, your iPhone apps are styled to look like native apps using CSS3. While creating a truly native application is extremely time consuming, with Alpha, you can accomplish your iPhone app development effort a LOT faster than with other software (based on user surveys)—and end up with an application that runs on any modern mobile device!