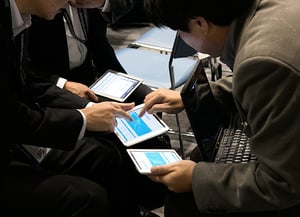 Get Ready: Citizen Developers will soon be writing their own apps.

By now it’s well-known that we live in a bring-your own-device (BYOD) world in which many companies let their employees use the mobile devices of their choosing, rather than forcing them to standardize on a single piece of mobile hardware. And now comes the next natural evolution: BYOA, bring your own apps.

With BYOA, employees use apps of their own choosing that do work that in that the past the company and its technology might do, such as coordinating work hours with other employees and answering questions the human relations department would typically be asked.

The trend was first spotted by the Wall Street Journal in its article, “Apps Empower Workers, Ease Scheduling.” The piece highlights the use of the Shyft app by thousands of employees at chains including Starbucks and Gap Inc.’s Old Navy. The app lets co-workers see their own schedules and that of other employees, and let them swap shifts. The article points out that employees use other apps to do things that unions previously used to do, such as helping employees file claims for wage theft, or explain labor rights. For example, the Android app WorkIt, created by OUR Walmart, which advocates for higher pay and benefits for Walmart employees, offers information about workers’ right. As in the earliest days of BYOD, some companies welcome the use of BYOA apps, others ignore them, and still others discourage their use. Starbucks essentially ignores Shyft’s existence, while Buffalo Wild Wings told the Journal that it encourages franchisees “to use tools that are most effective for them.” And Walmart, according to the article, has discouraged its employees from downloading WorkIt.

Given that companies are starting to allow employees to use their own apps at work, it brings up the next question: How about WYOA, write your own apps?

These days, you don’t need to be a professional developer to write apps --- you can be a line-of-business employee, tech analyst, or just someone who wants to give it a try. These employees taking a crack at developing apps are now being called "citizen developers." A WYOA world would be even more effective for employees and companies than a BYOA world, because citizen developers would create apps that are finely tuned for their specific jobs and businesses.

Learn to become a citizen developer and write your own apps.

Open Sesame! See How to Use Other Mobile Apps with Cordova-Open
TED Talk: “A Problem That Changed The World” featuring Alpha Software Corporation CTO Dan Bricklin