4 Things You Must Know Before Building Your First App

It can be tough to get started building your first app. If you’re relatively new to app development, you likely don’t even know where to begin. Here is some help. 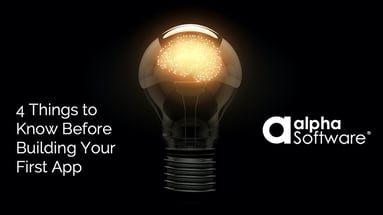 Building your first app is a big step, but if you get some help with the most basic of basic information, you’ll go a long way towards getting to the starting point. And as long as you have a solid plan in place, it’s not that far from there to the finish line.

The article, “How Much Does it Cost to Build an App in 2020? [A Complete Guide]” is a great place to begin. It lays out, in simple terms, the most important four things you need to do to get started.

Before doing anything else, the article says, make sure your app will offer a real payoff. You don’t want to devote a great deal of time and effort to something that doesn’t make financial sense.

So you should first develop a business model. What’s a business model? The article puts it succinctly: “Simply put, it is an assortment of factors that include determining the target audience and their pain points, offering better solutions, making it a direct source of revenue through sales, etc. and most importantly knowing that your customer is the most important factor in your business model hence prioritizing their demands.”

Step 2: Decide What Kind of App You Should Build

Next, decide what kind of app you should build? You have three choices:

Step 3: Determine which Platform to Write For

Do you want to write for iOS, Android, or both? Writing for both gives you a larger potential audience, but could cost more and takes more time if you don’t use code that can form the basis of both apps. Android has a larger worldwide market share, but the payoff isn’t always as great as iOS.

Are you looking to build a fully featured app with lots of bells and whistles, or something as simple as a checklist or form? Nail this down before starting to code. That way, you’ll best be able to estimate the total time it will take to build the app and the total cost. The article has some very good guidelines for estimating how long each feature will take to code, or how much it would cost to have it written for you.

Developers can build mobile apps for free with Alpha Anywhere Community Edition. You only pay when you deploy the finished apps - for as little as $99/month.

Want to try mobile app development yourself? Read how to build your first mobile app.