Should You Develop for iOS or Android? 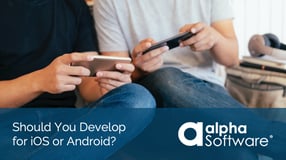 Some very good advice on which route to go in the article, “Android vs iOS: Which Platform to Build Your App for First?”

First, the article says, you need to determine at which market you should aim your app. That will go a long way towards deciding which platform to write for.

The article notes that Android devices have a greater market share, but customers spend more money in Apple’s App Store than in Google Play, which houses Android apps.

For a broad global market, the article says, Android is best. That’s because it dominates the Asian, African and Latin America markets. Android users are also slightly more likely to work in technical jobs than those with iOS devices. And the article notes that “Slightly more men prefer Android than iOS.” 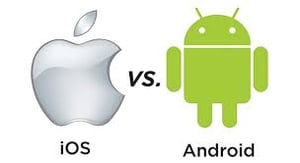 iOS is better for the “affluent, young audience in western Europe, Australia, and North America,” the article says. iOS users earn 40% more than Android users, it says, and are also younger. There are more women iOS users than men.

Also consider the time and cost of development.. The article claims, “It’s faster, easier, and cheaper to develop for iOS — some estimates put development time at 30–40% longer for Android.” That’s in part because an Android app requires 40 percent more lines of code that a similar iOS app.

If you’re looking to add the most features and bells and whistles, Android is the way to go, the article says. However, “Apple is generally perceived as being more secure, due to its closed nature, which is largely why iOS has a larger audience in the enterprise market.” So if you’re aiming at the enterprise market, iOS is a better bet.

Finally, consider how you plan to monetize your app. The article says, “Android users tend to be less willing to pay for apps than iOS users, so free apps with in-app ads are more common.” So if your business model relies on in-app ads, Android is the way to go.

iOS users are more likely to be willing to pay for apps. The article points out, “The Apple App Store generates twice as much revenue as Google Play, despite having half as many downloads.”

Here’s what it concludes about monetization: “The takeaway: If you want to monetize your app without ads, whether through subscriptions, freemium models, or in-app purchases, then Apple may be your best bet. The same applies to e-commerce apps. However, revenue from Android apps is growing. Though Apple is expected to remain the dominant App Store, Google Play and third-party Android stores combined are expected to overtake the App Store in terms of revenue.”

A Better Way: Cross-Platform Development for Both iOS and Android

Writing native apps for both iOS and Android means you'll spend at least twice as much time as you need to, because you have to write separate apps for each platform.

You don't have to choose, with Alpha mobile app development. We do cross-platform mobile development and produce responsive apps with all our products. In fact, we walk you step-by-step through developing your first mobile app. Our pre-built app templates also make mobile app design a breeze.

Try low code app development for free. Download Alpha Anywhere Community Edition and build all the apps you need at no cost.