Many mobile apps focus on data collection. Alpha Software is focusing on helping companies take their mobile forms beyond simple data capture to take full advantage of the power of smartphones..

Developers often design forms to emulate paper forms on tablets. However, forms built for the mobile environment can and should offer so much more. To discover where forms on touch-enabled devices could be, Alpha Software assembled a Tablet Advisory Board to discuss the future of mobile forms.

On June 2nd, Alpha Software held its first Tablet Advisory Board Meeting in Burlington, MA. The event brought together a cross section of Alpha customers from various industries charged with developing tablet-optimized forms that serve “standing workers” in modern enterprises.

During the 1-day event, each advisory board member presented their specific business use case(s) for touch optimized forms and discussed the pain points they've experienced to date when building these apps.  Two reporters who cover mobile app development for TechTarget attended the event hoping to learn more about what the next generation of web forms might look like in enterprises. After the event, each reporter gave their perspective on what they learned. 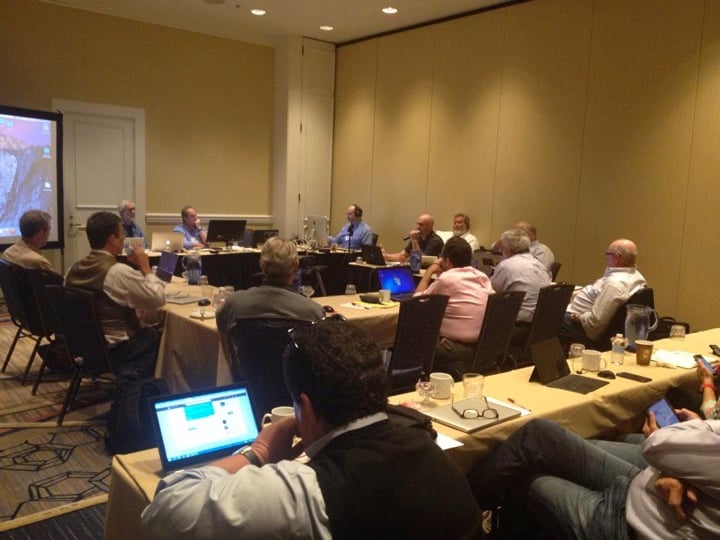 On June 3rd, James Denman of TechTarget Software Quality Insights pened the article, Familiar Landmarks on the Roadmap from Clipboards to Tablets In his article he quoted Alpha Software CTO Dan Bricklin:

“…If tablet applications are to be successful, ‘they can’t be worse in certain ways,’ Bricklin pointed out, ‘They can’t slow the user down. They have to have some advantages, like making it easier to scan in new information, add photographs, etc.’

The article went on to discuss how design, usability and landmarks can help insure that tablet optimized forms are widely adopted and used.

Fred Churchville of TechTarget SOA ran his story on Wednesday: Data Transfer Latency: Tackling Problems Related to "People Systems"  He explained that one of the major pain points discussed was the issue of moving data from user to user across systems in real time for faster business impact.  While some may refer to this as the “latency” problem, advisory member Britt Whitaker, an implementation consultant at Manufacturers ERP Services LLC, noted that it’s worthwhile to distinguish technology-based latency issues and “workflow-related” latency issues.

Many thanks to our Tablet Advisory Board members and all our customers who continually work with us to raise the bar for business application development.