Forrester Research released a report saying that mobile apps that can work offline is the "most important and difficult feature" of modern business apps.  So what can offline apps do for business and why are offline apps important?

What are offline apps?

Most modern business apps require a cell phone signal or Internet connection to get tasks done. Offline apps allow people to use a mobile without having to worry about the presence of a WiFi or cell signal.

Why are offline apps important?

In situations where people want to access information or capture information when they need to, offline apps make it possible to:

Offline capability requires mobile app development to be done to pre-configure the app to work ahead of time to make information available when field workers need it.

What Are Examples of Successful Offline Apps?

Companies around the work are finding critical situation in which offline capabilities are needed. Here are some examples of how they're allowing users to do critical tasks on mobile apps, even without a cell signal or internet connection:

What are the Benefits of Offline Applications?

With mobile becoming core to digital transformation, there are 4 core benefits of building strong offline support into your mobile business apps:

1. The ability of the user of the app to be able to do the work assigned to them.
This is obviously the fundamental reason for offline support in a mobile business app. When a mobile worker (field service, healthcare, construction, manufacturing, energy, mining, hospitality etc.) is assigned a job that requires that they use their mobile device to get the job done, they must be able to accomplish their tasks without being dependent on a reliable and solid connection. Issues with no signal/poor signal/inconsistent signal are real and occur all the time. In fact, even in cities/towns/suburbs there are areas where signal is non-existent or spotty.

2. Responsiveness and Performance
Because there is not need to continually connect to a remote server, offline mobile apps are able to deliver greater speed and performance

3. Cost Savings
There is no need to have a wireless/data plan. At $40-$80 per month per mobile worker, these savings can add up quickly.

Are Offline Apps Hard to Build?

Offline apps are important, but is it hard to create an app that works even without a connection or signal? Not necessarily.

Analysts report that offline capabilities are typically the most time consuming and expensive part of modern mobile app development. They typically require that the app building has extensive understanding of mobile technologies and frequently require native development.  However, in 2013 one vendor, Alpha Software, changed the game by building sophisticated offline capabilities into its low code development platform, so developers could produce offline apps with outstanding reliability and user experience very quickly without needing extensive mobile coding experience.

Alpha Software understands all these challenges and as a result, has assembled the most comprehensive portfolio of patented offline capabilities designed to make building mobile apps that address the offline challenge as easy and hassle-free as possible. Alpha Software handles all the above business requirements in the most complete, powerful and patented set of development tools for building robust offline-capable apps.and Support for caching data offline as well as data synchronization when an offline app connects to a network make creating mobile offline applications easier with Alpha Anywhere.

Why Do Built-In Capabilities Make Development of Offline Apps Easier?

Alpha Software has built the industry's most comprehensive offline app solution to ensure these benefits and capabilities are a reality in apps developed with Alpha Anywhere. As a result, developers can build critical offline app functionality into business apps without having to do extensive coding:

1) Dependability - Functionality When You Need It, With or Without a Connection

Offline apps allow a the person in the field to keep on working on any mobile business app without having to worry about the presence of WiFi or cell signal. Users can access records, collect data and storage images or access manuals without cell service or a WiFi connection. when a signal drops, an application performs as if nothing happened.

Internet connections can vary, and a connection isn't always fast or cost-effective. Sometimes the field work does not have to constantly be connected to the back-end data on the server. They only need to occasionally be connected to load up and to refresh data. This is something  which can be done from home in the morning or from a coffee shop or public place with Wifi during the course of the day. In this case, the field worker does not have to have a data plan on their mobile device. And if an offline app is smart enough to sense if the worker has a cell signal versus WIFI and behave accordingly, it could have smart, cost-effective rules on when to use a cell signal (to get critical data to the field worker) and when to hold off (when customer service report images are uploaded). The implication of smart offline apps is that companies could then save  $40 or $50 per field worker per month. If you do the arithmetic, for a field force of 100 or 1000 workers, the savings would be in $4000-$5000 to $40,000-$50,000 per month range!

3) Improved Performance - Access To What You Need, When You Need It

If all the data that is being worked on is available on the mobile device, you eliminate the latency of the data moving back and forth from the server across 3G/4G - which results in faster performance. Plus, the worker has all the data, customer  records or manuals s/he needs in the field - right at the moment they need it. 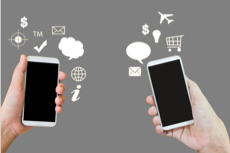 What happens if two workers change the same data at the same time? This can happen often when a crew (or multiple crews) are assigned to the same project. With Intelligent Conflict Resolution, you have some flexibility in how to handle these situations. You can decide, based on who submitted data (first or last) you can decided based on the rank of the user (line worker vs. foreman), or the system can alert the user to the conflict and ask how to resolve it.

In many cases workers bring their own phones to work and use them on the job, also known as BYOD (Bring Your Own Device). For reasons of security and privacy, a worker's personal data and work data need to be kept strictly separate. For example, if a worker needs to take a phone to fill out a report, their work photos should be kept separate from the phone's camera roll, where the worker may have personal pictures.  And because phones have limited storage capacity - files should automatically be deleted from the device as soon as they are safely uploaded to the server when a connection becomes available.

How Can I Start Building Offline Apps?

Need more info about  your specific needs?  Contact us for documentation or to speak with a solutions architect.

Where Can I Learn More About Offline Apps?

Alpha Software has produced two white papers to help people better understand offline apps, why they're useful to business and how to build them successfully. First, an overview of offline app problems and why offline capability can be such a complex app feature to build.  Second, a white paper that explains how Alpha Anywhere allows you to build offline apps easily with its built-in capabilities for robust offline operation.

Consulting Group Cuts Costs, Speeds up Development and Improves Customer Loyalty with Alpha Software
The Alpha platform is the only unified mobile and web app development and deployment environment with distinct “no-code” and “low-code” components. Using the Alpha TransForm no-code product, business users and developers can take full advantage of all the capabilities of the smartphone to turn any form into a mobile app in minutes, and power users can add advanced app functionality with Alpha TransForm's built-in programming language. IT developers can use the Alpha Anywhere low-code environment to develop complex web or mobile business apps from scratch, integrate data with existing systems of record and workflows (including data collected via Alpha TransForm), and add additional security or authentication requirements to protect corporate data.