You don't have to have a degree in computer science, work as a software engineer or have experience as an Android developer to build apps. Alpha Software offers free mobile app development software and learning materials to help anyone become a mobile app developer.

With outstanding mobile app development In our fast-changing economy, old jobs die, and people who are laid off frequently need to turn to entirely new fields. It can be a daunting task to retrain yourself for the new economy after years at a previous job. But that’s exactly what Mike Brown did, with the help of Alpha Software. 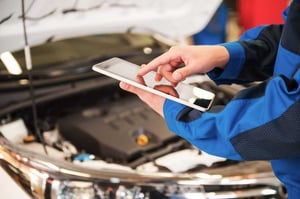 During the Great Recession, in 2007, Mike Brown was laid off from his job as a maintenance mechanic. Rather than look for a similar job, he decided to learn programming, feeling that would lead him to a better future.

To help reach that goal, he chose to learn how to program with Alpha Software. After gaining app development skills, Brown hasn’t looked back.

“At first, I didn’t know anything about database programming, I didn’t know what JavaScript was, I had no formal education in it. I didn’t have a clue. But with Alpha Software and good mentoring along the way I achieved my goal.”

At first, he says, learning to program and develop user interfaces was like “learning a foreign language.” But he cites Alpha’s excellent documentation as being a tremendous help. With an active community of 17,000 software developers, Alpha Software’s forum, he says, “is a great resource. No matter what kind of problem you’re facing, or what you need to solve, you can always find help there.”

He says that Alpha’s sample programs and code were a great aid as well, and not just in the beginning. He still turns to them, and to Alpha’s forum whenever he runs into roadblocks.

Alpha Software, he says, gives him all the tools he needs to write any program for any job he’s asked to tackle.

“Alpha does everything I need, and I feel like I’m just scratching the surface,” even though he’s been programming with it for more than a dozen years, he says.

Thanks to Alpha, he now has a thriving business, Programmatic Technologies, writing applications for a wide range of companies, from healthcare to the food industry, located across the United States and in the U.K.

His jobs range from the simple to the extremely complex. Some, such as developing an order management system for a small business providing local restaurants and food retail outlets with farm-fresh fish and produce, take him only a few months. He can write complete applications quickly by using out-of-the-box prewritten Alpha components or templates.

But others, such as building a medical records and scheduling system including generating Medicare claims, can take upwards of a year because it requires so much complex, customized programming. Alpha Software, he says, gives him the flexibility to do that customized development work.

Whether writing simple applications or sophisticated ones, he says, he can’t imagine using any other development tool.

“Alpha Software has been really a key to my success,” he says. “I can’t imagine ever leaving it. I’d recommend it to anyone just starting out how to learn to program, as well as for professional developers with years of experience behind them.”


Learn How to Build a Mobile App with Alpha Software

Alpha Software has tools and programs to help you learn mobile development. This step-by-step mobile application development guide for beginners offers tips and resources on how to build an Android app for iOS app. No matter your background or previous career, you can become an app builder. In fact, many people are using the current market environment as the perfect time to establish a new SaaS app business.

App builders can use a free development platform to build an app or do web development that runs on Android and iOS devices. Want to improve your software development or change your career path? Get free app development software and practice your skills.