Many locations have poor internet connections that slow down or hinder business apps. Read how you can improve mobile app performance. 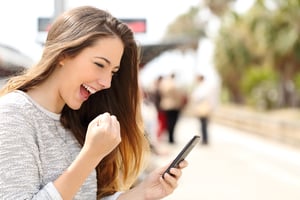 It’s an old cliché to say we live in a connected world. But like many clichés, it’s not necessarily true. Plenty of places have poor Internet connections, or no connection at all, notably parts of Asia, South America and Eastern Europe. But even in in the United States there are plenty of places out of the Internet’s reach, including some rural areas, remote work locations, inside many elevators, and when traveling in airplanes. Here's a look at some of the key issues and how you can improve mobile app performance.

How can you make sure your mobile apps work well, even when in low-connectivity areas? A Gartner report, “Four Techniques for Improving Application Performance When Faced With Poor Quality Internet Connectivity,” offers great advice, which I’ll summarize it below. And we’ve got a fifth piece of advice for you as well, which I’ll offer at the end of the blog.

Gartner notes that not all connectivity woes with mobile apps are caused by poor Internet access, warning, “It is easy to blame bandwidth for poor application performance, but sometimes the issues are closer to home, with poorly architected applications slowing performance and leading to a substandard customer experience.” So it says that before taking any of the following steps, companies should first “evaluate the latency, application requirements and quality of connectivity available in their regions to identify the true causes of application performance challenges.”

After that, one thing to consider is to “leverage acceleration technology to improve application performance.” Gartner recommends a variety of techniques, including using application delivery controllers, which deploy central acceleration devices to optimize mobile app performance. Also high on Gartner’s list are WAN optimization controllers, and the use of an MPLS VPN.

Another Gartner recommendation: “Use Content Delivery Network (CDN) for geographically distributed Internet service delivery.” A CDN is “a geographically distributed network of servers,” that can cache data and also accelerate data delivery. CDNs are scalable and offer pay-as-you-go pricing, which means you can improve performance without investing in hardware or additional bandwidth.

Another thing to consider, says Gartner is to “locate data centers closer to target markets and deploy multiple near-synchronous sessions.” The physical locations of data centers and web servers can have a significant impact on performance, and the closer they are to users, the more performance they offer. If your business operates in multiple markets, you can deploy multiple near-synchronous sessions close to each location.

Finally, Gartner says, you should “require agility and scalability in app design and use the new architecture to enable a paradigm shift.” One move to consider: use the public cloud via providers such as Amazon Web Services (AWS) and Microsoft Azure for their agility and scalability. Beyond that, public cloud providers are global so will have points of presence closer to all your target markets, and typically offer WAN optimization.

In addition to these tips on how to improve mobile app performance, we add one more piece of advice: Build apps designed to work offline. That way, people can use the apps no matter the state of connectivity, and will sync data and work when they return to higher-bandwidth areas. A great tool for doing it is Alpha Anywhere, which has had the capability to build offline apps for years. With it, developers can create offline capable apps and offline forms with no incremental effort or cost. Many businesses have used Alpha Software to build offline apps, including American Pool and Dwellpoint. To help you follow in their footsteps, we’ve created a free mobile inspection app with offline capabilities that you can download for free, and a recent blog post showcasing some of the best offline mobile apps and why offline apps are the wave of the future.