Will Wearables Finally Break Into the Enterprise in 2018? 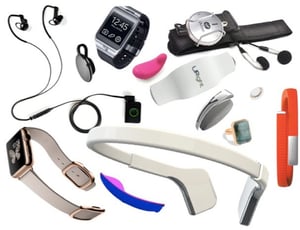 For several years, analysts have been predicting that wearables such as smart glasses, virtual reality and mixed reality headsets and smart watches will make it big in the enterprise. So far that hasn’t happened. But will wearables finally break into the enterprise in 2018?  There's evidence that this may be the year they finally hit.

That growth was actually a slowdown from that seen between 2015 and 2016, in which wearables grew by 27.3 percent. But IDC believes bigger growth is on the horizon. Ramon T. Llamas, research director for IDC's Wearables team, explains, “The slowdown is not due to a lack of interest – far from it. Instead, we saw numerous vendors, relying on older models, exit the market altogether. At the same time, the remaining vendors – including multiple start-ups – have not only replaced them, but with devices, features, and services that have helped make wearables more integral in people's lives. Going forward, the next generation of wearables will make the ones we saw as recently as 2016 look quaint."

IN addition, VDC Research, in its report, “The Global Market for Enterprise-Grade Wearables,” finds that the global enterprise market for wearable technology will grow 46.5 percent between 2017 and 2022 year over year.

The VDC report notes that wearable growth has been slower than expected in recent years in wearables for the enterprise. It says that some enterprises “remain suspicious about the real value wearable solutions provide relative to their still-significant adoption costs.” However, it also says that there’s been a shift in momentum towards wearables in the enterprise because “wearable solution providers are finding ingenious applications for their technology.” Advances in user interface design and using artificial intelligence and voice input, the report concludes, will also spur adoption.

At Alpha Software, we’re believers in wearables. They have proven they can increase productivity, and are an important component of the connected workplace. The report from APX Labs, “What’s Next in Wearable Technology,” says that in order to “truly harness the power of IoT and the connected workplace, businesses need to move beyond analysis and make operational use of this data, in real time, and at the point of actual work.” That needs to be done hands-free the report says, because workers who need the IoT data may be on a manufacturing line, handling shipping in a distribution center or out in the field performing maintenance. As a result, as IoT grows in enterprises, the report says, wearables will grow as well.

For more details about wearables in the enteprise, read my blogs, “Report Finds Wearables Will Skyrocket In The Enterprise,” and “For Enterprise Wearables, The Future Is Now.”

Related Posts
The Alpha platform is the only unified mobile and web app development and deployment environment with distinct “no-code” and “low-code” components. Using the Alpha TransForm no-code product, business users and developers can take full advantage of all the capabilities of the smartphone to turn any form into a mobile app in minutes, and power users can add advanced app functionality with Alpha TransForm's built-in programming language. IT developers can use the Alpha Anywhere low-code environment to develop complex web or mobile business apps from scratch, integrate data with existing systems of record and workflows (including data collected via Alpha TransForm), and add additional security or authentication requirements to protect corporate data.