Is it better to build a native Android app or build a cross-platform iOS and Android app? We take a look at the best way to build mobile applications while ensuring faster time to market and outstanding user experiences.

When we look around, it's clear that mobile devices are everywhere.  In fact, as of 2020, there were over 14 billion mobile devices being used worldwide.  And with the growth of 5g and other mobile technologies, it becomes clear that developing an app for your business may be essential for success.  When you choose to build an app for your business, you would likely want to reach users across all platforms. The question then becomes, should you develop separate native apps for the most popular platforms, or should you harness a cross-platform development environment to build a single application.  Let's explore the issue and consider some of the pro's and cons of each option.

What is Native Mobile App Development?

Development of Native Applications is specific to one platform (either Android, iOS, or Windows). Applications designed this way can take full advantage of all the device features such as a camera, compass, GPS, accelerometer, contacts list, etc. Native apps are most often installed through the platforms application store, such as Android's Google play or the iOS/Apple App Store for iOS.

An app will be considered 'native' if its development is completed using a programming language adopted for a particular platform, such as Objective-C and Swift for iOS or Java for Android. This provides some distinct advantages but also requires the developers to possess expertise in those languages.

Some advantages of native development are:

Developing Native Apps for all common platforms can be costly though. If you are developing on a tight budget or project deadline, native development might not be the best solution. Since separate applications need to be developed for each platform, you might need to employ multiple development teams to complete the platform specific applications simultaneously. It's certainly not a viable option for many small to mid sized companies.  That’s why it's important for us also to consider cross-platform frameworks which allow development of an app that functions on iOS and Android using a single tool.

What is Cross-Platform App Development?

Cross-platform apps are created in a development environment that enables production of apps that will operate on a myriad of devices and operating systems. These universal solutions can be convenient and profitable, but you run the risk of losing quality, because these environments offer more generic solutions to meet development objectives. One advantage is that cross-platform frameworks “fit” the application to multiple operating systems, eliminating the need to create unique development paths for each platform.

Some other advantages of cross-platform development are:

Due to an additional layer being needed to insure use across differing platforms, an app developed in a cross-platform environment may run slower than native solutions.  These slowdowns can be mitigated through efficient design practices so its not necessarily an issue.

And due to the low-code development format commonly employed by cross-platform development environments, much more can be accomplished with less specialist support. While this is a huge benefit to app development cost and speed of production, it does present some limitations:

1) The user interface is often limited.

2) There may be an increased potential for bugs and costs associated to troubleshooting your app prior to launch. This is due to the complex challenge for one app to be accepted by all common platforms.

3) Apple is known for their strict app acceptance policies and developing cross-platform apps has been increasingly difficult for iOS.  If you develop cross-platform, or not native to apple devices, you may face challenges to publishing in the App Store.

Native apps are developed exclusively and in a language that is compatible with a specific platform.  Native Apple apps are developed in Objective C and Swift for iOS.  Native Google apps are written in Java for Android. Because developers are writing in the devices native code, they can often make better use of the innate features of these platforms. Conversely, a native app developed for iOS will not function on Android and vice versa.

Cross-platform apps, on the other hand, are compatible with multiple platforms. Due to market dominance by iOS and Android, most cross-platform apps are limited to these two operating systems. These apps are typically developed in HTML and CSS since these standard web technologies are usable across most platforms. There are many cross-platform application development tools that allow developers to create these apps easily but not all are created equal. 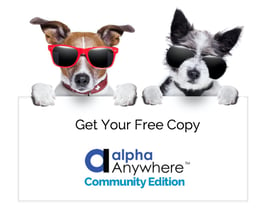 Our recommendation is for you to use Alpha Anywhere Community Edition.

Alpha Anywhere Community Edition is the best choice for building your mobile apps. Alpha Anywhere gives you the power and control of native apps while also facilitating your process with flexible and efficient capabilities that are typically available only to cross-platform development. What's even better, our fully featured low-code development environment is also free to use, so get started right away.  Download Alpha Anywhere Community Edition now, and begin building apps for free. And be sure to take advantage of our mobile app development for beginners tutorial, and also our vast documentation site. 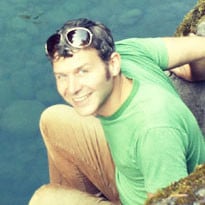