Low-code and no-code development platforms have long been popular with developers and non-developers for building applications without writing code. Companies have slowly adopted the software to speed the development process for mobile applications. But beginning in 2021, these solutions, which include low code software, drag and drop tools and visual modeling, will begin to dominate the development world. 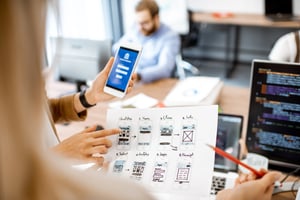 So concludes the article “Low-code and no-code tools may finally usher in the era of ‘citizen developers’.” It points out that the era of “citizen developers” will soon arrive in companies ranging from large enterprises to small businesses. And CIOs, rather than fighting it, will welcome it with open arms.

The article quotes from a variety of analyst studies about just how widespread low-code/no-code will become. A Gartner forecast says three-quarters of large enterprises will use four low-code development tools or more by 2024. Perhaps even more important, the forecast says low-code platforms will be responsible for more than 65 percent of all application development by that year.

In addition, Verified Market Research says the low-code/low-code market will grow more than 44 percent each year through 2026. It will reach $112.43 billion by then, the research shows.

Multiple factors are helping drive the surge towards low-code/no-code, the article says. A big one is the “growing shortage of professional developers.” The article cites one estimate that there are now 660,000 open jobs for software developers, but only 75,000 graduating computer science majors every year.

Beyond that, the article says, “The digital transformation craze that has taken hold in the wake of the COVID-19 pandemic will only drive demand higher.” The article cites a forecast from the U.S. Bureau Of Labor Statistics that says demand for software developers and software quality assurance analysts will grow at a rate five faster more than all other jobs through the end of the 2020s.

Greynier Fuentes, vice president of Digital Solutions at VeriTran Holding Ltd. BVI explains, “There’s not enough developers in the world to meet the ever-increasing demand for code and it’s going to get worse,” said. And Avon Puri, global chief digital officer at venture capital firm Sequoia Capital Operations LLC, adds, “Typically IT teams are under-resourced to meet all the needs of the organization. Every single CIO is at the point where technology is integrated into every process.”

Another factor, the article says is, “IT organizations are also becoming more comfortable with letting business-side colleagues get their hands dirty. Corporate databases are still tightly controlled, but applications such as workflow automation, forms-oriented data collection and analytical processing that are the sweet spot of low-code/no-code technology generally don’t touch the crown jewels and are considered low priority for professional developers.”

CIOs are embracing the platforms with open arms. The article cites a Gartner report which found 41 percent of CIOs already have citizen development projects, and another 20 percent have projects in the evaluation or planning phases.

Gartner reports that 41% of CIOs already have citizen development projects that involve low-code or no-code products.

The result of all this? The article quotes Arnal Dayaratna, research director for software development at International Data Corp: “There’s a strong feeling that successful enterprises will evolve to a model in which everyone has some training in software development, whether as a professional, a low-code developer or a business resource that’s skilled at providing requirements. We’re entering a world where we’ll all be developers.”

The Best No-Code/Low-Code Software for You

If you need to take apps further, Alpha Anywhere low-code development software has the unique ability to rapidly create mobile-optimized forms and field apps that can easily access and integrate with any database or web service and can exploit built-in role-based security or robust offline functionality. Build apps for free with Alpha Anywhere Community Edition.