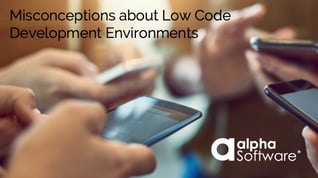 I’ve often written that low-code and no-code app development is taking the business world by storm, whether it be large enterprises, medium-sized businesses, or small mom-and-pop operations. In fact, in one of my recent blog posts, I’ve pointed out 2021 is expected to be the year of low-code.

That doesn’t mean that all is free sailing for the platforms, or that there aren’t potential problems with them. A Forrester survey found that enterprises are a bit leery of them because of possible security problems. Fifty-nine percent of respondents to the survey said security issues was the most pressing challenge in adopting the platforms.

It needn’t be that way. There’s plenty you can do to make sure your no-code/low-code apps are safe, according to the article “4 security concerns for low-code and no-code development.”

One fear enterprises have, the article notes, is that the platforms allow staff and citizen developers to build apps without IT input. Enterprises may worry that could mean an end run around proper security.

There are multiple solutions for this. One is to make sure your no-code/low-code platform includes security built right into it. Another is to move low-code development to the cloud, according to Gartner analyst Jason Wong. By doing that, he says, "there is more ability to apply governance to access, and have rules-based permissions."

How to Keep Data Safe

Another issue is whether no-code/low-code platforms can keep data safe. There needs to be some way, Wong says, to make sure businesses can restrict the data being shared, and control how it can be used. He says that can be easily done: “You can set up a sandbox where the users can build whatever they want but can't access mission-critical data. If they need access to anything else, that could be a request to the business and to IT: 'Hey, I work in HR, but I really need this piece of customer data for my app.' Then you could get approval, and maybe only have read-only access to that data."

The Importance of App Testing

Yet one other security problem, the article says, is that inexperienced developers could use no-code/low-code platforms and undermine enterprise security, for example, create an app that accidentally “allows one user to see data belonging to another, or that posts sensitive information to a public location that could cause significant problems for a company.”

The answer, according to Charles Henderson, head of the X-Force Red cybersecurity group at IBM, is that enterprises should apply the same level of security testing to the apps built by the platforms that they do to their traditionally developed software.

He puts it this way: “Security testing programs reach far and wide. Most enterprise firms have pretty well thought out security testing programs at this point, and often use outside firms to do the testing. But the low-code apps, often they don't get caught up in the same security testing that other applications would be subject to. Security folks need to take the lessons they gave to in-house developers and teach them all over again to end-users who might be using low code platforms."

Above all, you should choose a no-code/low-code platform with enterprise-level security built directly into it. Alpha Software does exactly that. It offers mobile and web app login authentication, device-level data encrypting and wiping, secure data authorization, permissions and restrictions, support for security standards and more. Start building apps for free with Alpha Software low-code software.


Further Reading on Low-Code:
Read about The Benefits of Low-Code Software,  The Pros and Cons of Low Code Development or Expert Tips to Get Started with Low Code

And if you are concerned about low code security, you might be interested in How to Make Low Code Secure or An Analysis of Low Code Development Security Compliance.

Further Reading on No-Code:
If you aren't able to code, perhaps a no-code app builder is a better fit for your needs. Learn about the Benefits of No-Code App Builders.