"Using Alpha Anywhere, we were able to build a mobile expense-tracking app quickly and easily deploy it to multiple platforms. We saved time and money, and got to market much more quickly. We'll also be able to continually add new features, which should bring in new customers and help retain existing ones."
- Lee Haddox, IT Manager for Knectsoft

Knectsoft Solutions, LLC specializes in software development for enterprises with an emphasis on Software as a Service. It also provides custom software development, software integration, website construction, cloud hosting, software/hardware troubleshooting, and general IT support. The company has developed software for large and small customers in the automotive, transportation, energy, insurance, medical, and retail industries.

Knectsoft employees had to turn in expense reports every week on Monday morning by filling out an Excel spreadsheet, printing three copies of it, copying their expense receipts, and attaching the receipts to the printouts.

"We thought that we could make the process easier on ourselves by creating a mobile app where we could enter the information, and have the system handle everything from there — automatically create a PDF, including photos of the receipts, and have it emailed," says Lee Haddox, IT Manager for Knectsoft. "As we thought about it, we realized that this was something that might be useful not just internally, but something that we could sell as an app and a service as well."

"It combines ease of use with powerful features, and makes it easy to write the app once and then deploy it on multiple platforms."

Knectsoft decided to write the app not just for itself, but also to sell it to businesses. They have used many different development tools over the years, but they immediately knew that Alpha Anywhere would be ideal for developing the app.

"It would have taken a tremendous amount of time if we had to write the app multiple times for different platforms," says Haddox. "With Alpha Anywhere, we could write the app once and then deploy it to iOS, Android, and to Windows Phone in the future."

They were familiar with Alpha Anywhere from past development work, and also knew that Alpha Software constantly added new features to it. "That was a big plus as well," he says. "I knew we'd be updating the app, and with Alpha Software, we'd be able to continually make it better."

"The List become the app's cornerstone," he says. "Alpha has added a lot of functionality to it. We piggybacked onto it and used it to store photos of receipts taken with a phone's camera. We also scaled the images with tools built into Alpha Anywhere. That's important because the images need to be uploaded to a server and stored in a database. Smaller images use less cellular data, so people don't go over their data limits with their providers." 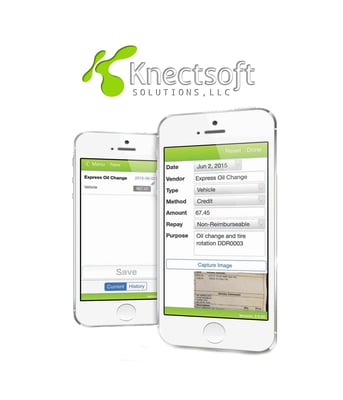 The completed app, called KnectXpense lets people record all of their expenses, fuel card charges, and mileage in an iOS or Android app. The app can photograph receipts, track mileage, and research past purchases or travel. It also uses the GPS capabilities of the phone to record where expenses were recorded, which is useful for salesmen who often travel.

All of this data is upload to a server. Knectsoft also built a backend to allow its customers to manage account administration, search for transactions, and print reports. Additionally, the backend can generate the automated report PDFs and email them to employees/managers. The app is available on Apple's App Store and in Google Play. It is used by individuals and by companies, which are charged on monthly, subscription, per-user basis.

"It would have taken a tremendous amount of time if we had to write the app multiple times for different platforms. With Alpha Anywhere, we could write the app once and then deploy it to iOS, Android, and to Windows Phone in the future."

Knectsoft reaped considerable benefits using Alpha Anywhere to build the mobile app, including faster time to market, reduced costs, and having the tools to design an app with all the features they wanted. They were able to speed the expense report process in their own business, as well as realizing a previous nonexistent revenue stream — the KnectXpense app they sell to businesses.

He says that it only took three months to write the app and backend system. That allowed it to get to market more quickly, which in turn means it started generating revenue more quickly. The app currently is in use by just over 20 companies, with more on the way.

"I glad we didn't have to write the app without Alpha Anywhere," Haddox says. "It combines ease of use with powerful features, and made it easy to write the app once and then deploy it on multiple platforms."

"We'll also be able to continually add new features, which should bring in new customers and help retain existing ones."