"With Alpha Anywhere I was able to build a sophisticated offline mobile app in only four days for capturing maintenance information on offshore platforms. No other tool would have let me work that quickly and build such an easy-to-use app for both smartphones and tablets."
- Thomas Guth, Independent Programmer and Consultant

Performs flawlessly, even when disconnected

The oil drilling company needed help building a system for capturing and tracking maintenance and inspection processes for its facilities in the North Sea. Because of the extreme conditions in which the facilities operate, the company could not rely on standard data-capture software that relies on Internet connectivity.

Employees had to input the data row by row, column by column, and enter the proper codes for each individual maintenance activity. All this meant that staff spent a great deal of time in manual work. In addition, there were errors when data was input.

Guth has used many tools during his twenty years as a developer, but chose Alpha Anywhere to develop the mobile inspection app because of the ease with which it creates mobile forms, its ability to write a mobile app once and deploy it to multiple mobile devices, and its ability to create tablet-based forms.

"Alpha Anywhere was ideal for me," he says. "I needed to build an offline enterprise-class app that would work on both smartphones and tablets, that lets me create tablet-optimized forms, that takes a low-code approach to app creation, and that could take advantage of cameras built into phones and tablets."

Guth took a two-stage approach to creating the inspection solution. He built a Microsoft Access database to put on the computer on the drilling platform, which would store all of the maintenance information. (The database automatically synchronized to a SQL Server Database, when it was in port.) He then used Alpha Anywhere to create an offline mobile app, designed for tablets and smartphones that would allow workers on the oil platform to record maintenance information, and update the database via Wi-Fi. 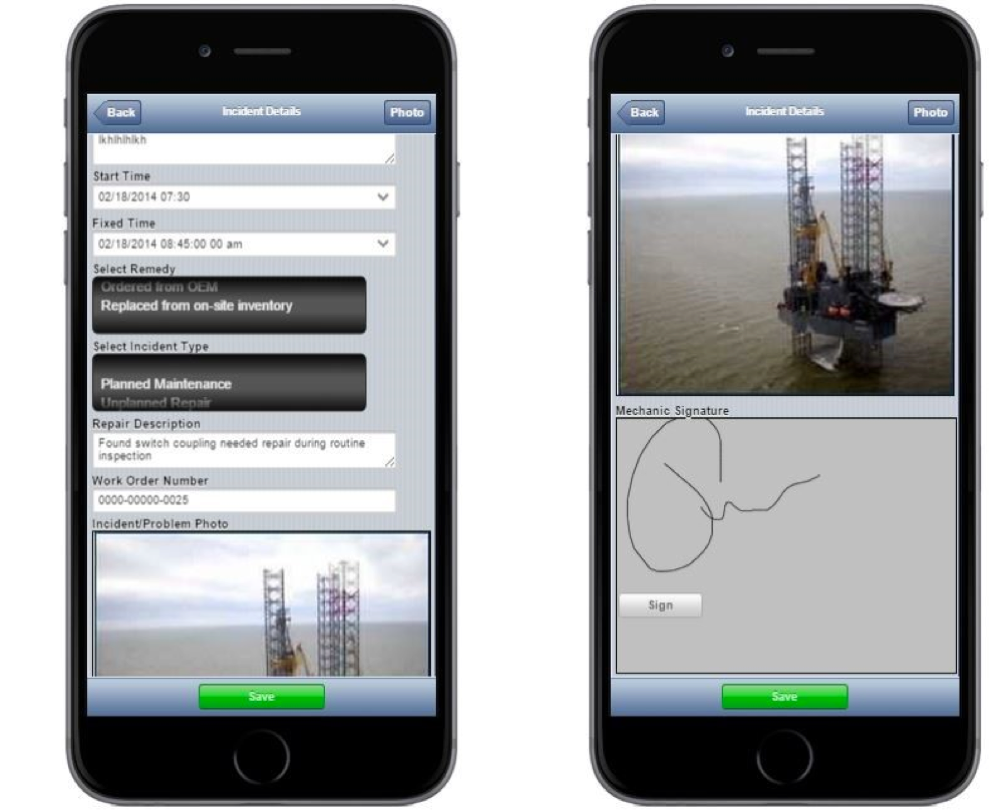 The inspection checklist app also allows field workers to use tablets or smartphones to take photos of their maintenance work, and works offline, even when not connected to a network. The photos are automatically date-stamped. This is a foolproof way to show inspection management exactly what work was done, and to verify when it was done. Also part of the app is a signature block so that the workers can sign the forms, an additional means of verification.

"Because of the low-code approach, I was able to deliver a full app in only four days. And that includes not just writing the app, but also testing and implementing it. I couldn't have done that with any other tool."

Guth says that he was able to write the maintenance and inspection solution in only four days. The offshore company had talked with other developers about writing the app, and all said it would take far longer and cost far more money than what Guth was able to charge because of his use of Alpha Anywhere.

"I used Alpha Anywhere's low-code approach to writing the app," he explains. "I delivered a full app in only four days. And that includes writing, testing and implementing the app. I couldn't have done that with any other tool."

Also useful, he says, is that he was able to build the app once, and then deploy it securely to both phones and tablets without having to do additional work.

The offshore company has reaped significant benefits from the field app. They were able to spend less money for it, and get it faster, because Guth used Alpha Anywhere to create it. In addition, the accuracy of their maintenance information and inspection reports have improved.

"Alpha Anywhere did a great job for both me and for the offshore company," Guth says. "I was able to build the app quickly, and they've gotten significant benefits from better data collection."

"Alpha Anywhere did a great job for both me and for the offshore company. I was able to build the app quickly, and they've gotten significant benefits from it."