The COVID-19 pandemic has led to a dramatic growth in the use of mobile apps, as well as in user engagement, recent data shows. There has been an increase in the time spent using mobile apps and an increase in visits to web sites. People are spending more time on apps.

Those are just some of the findings from the Airship study, “The State of Global Mobile Engagement 2020,” which studied data from nearly 750 million app users around the world.

The report found big changes in people’s mobile behavior after March, 2020, when the coronavirus pandemic hit. It says, “The data from the report shows massive gains for several key engagement metrics that had been trending downward before the pandemic.”

First, if found that the mobile app audience grew 31 percent year over year, compared to a 16 percent growth the previous year.

Consumer behavior changed dramatically. Strikingly, the report says, “After years of decline, location opt-in increased every month since March 2020, reaching 10.7% in June 2020, the highest average rate since before GDPR.” GDPR were online privacy regulations established by the European Union. 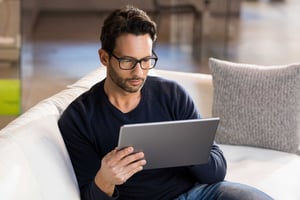 Before the pandemic, the report noted, “eight of twelve industry verticals saw declines in average location opt-in rates year-over-year.” But after the pandemic, began “eight of the twelve had significant increases.” As for which vertical saw the greatest growth, the report notes, “Medical, Health & Fitness, Finance & Insurance and Travel & Transportation verticals saw more than 100% growth in average location opt-in rates after the pandemic began.”

What does all this mean? It means that post-COVID, app use is skyrocketing. And it also means that engagement with those apps is increasing as well.

The report also means that it’s time for your company to get even more serious about writing mobile apps, because of the increasing and increasingly receptive audience.

Alpha Anywhere has the unique ability to rapidly create mobile-optimized forms and field apps that can easily access and integrate with any database or web service and can exploit built-in role-based security or robust offline functionality. Learn more about Alpha TransForm and try it free for 30 days.

Get employees screened for COVID-19 and back to work with the AlphaMED Workplace Wellness App.

Help students return to school with the Back to School App.